​Rules Overview
The objective of the sport of wrestling is to “pin” your opponent.  A pin (also called a “fall”) is awarded by putting your opponent on his back with any part of both shoulders or shoulder blades in contact with the mat for two seconds.  Once you pin your opponent the match is over and you are the winner. If neither wrestler gets pinned, the winner is the wrestler who has scored the most points during the match.  There are five ways to score points in a wrestling match:  Take Down, Escape, Reverse, Near-Fall, and Penalty.

Match Scoring
Takedown – 2 points – from a neutral position (both standing with neither wrestler having control) a wrestler gains control over his opponent down on the mat.

Escape – 1 point – When a defensive (bottom) wrestler gains a neutral position and his opponent has lost control.

Reversal – 2 points – When the defensive wrestler comes from the bottom position and gains control of his opponent, either on the mat or in a rear standing position.

Penalty – 1 or 2 points – A wrestler is awarded point(s) for technical violations or infractions of the rules committed by his opponent.  A penalty is usually 1 point unless it is a multiple occurrence of the infraction (usually third) which is then a 2 point penalty.

Note that Saturday recreation scrimmages may run 1 minute periods for ALL age groups.

Referee Hand Signals
The match referee will use a variety of hand signals to signal to the scorekeeper and to the coaches and spectators. 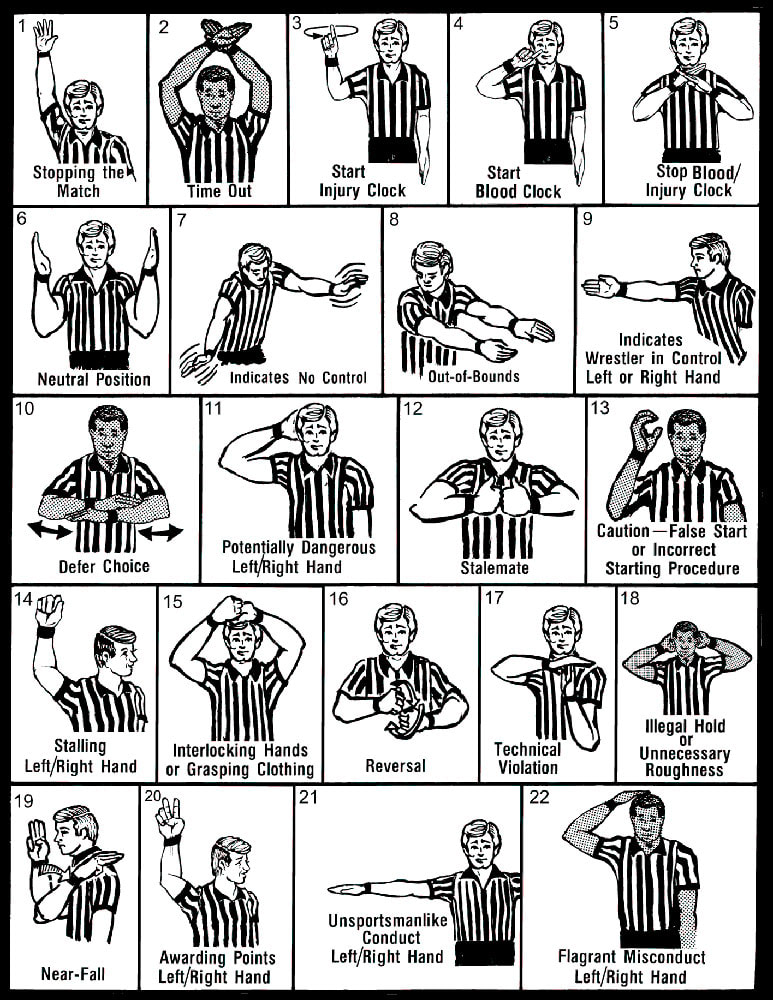